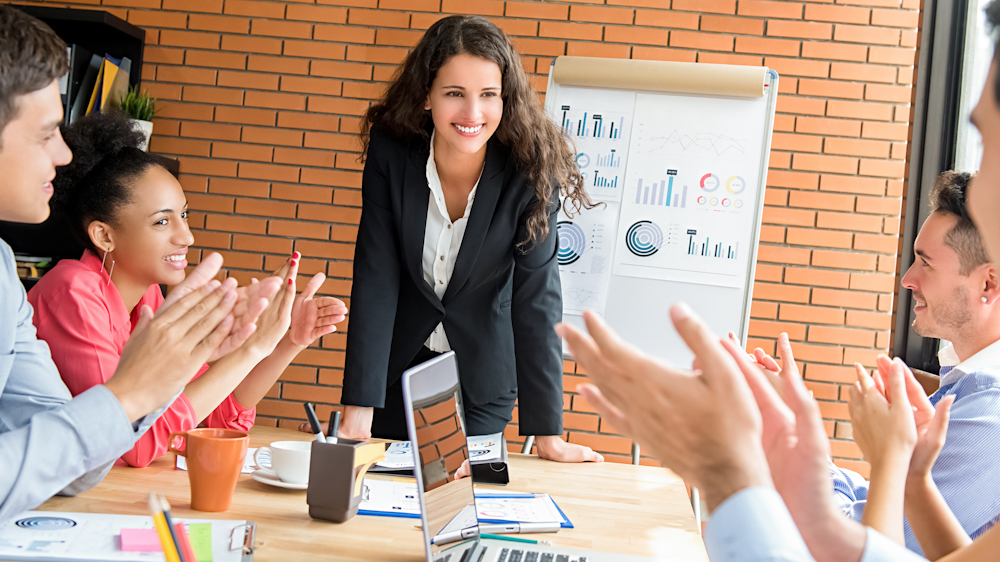 Expectations have risen significantly of presentations in the age of online video. No longer are a few plain slides enough – people want to immerse themselves in the speaker’s story. They want to be engaged, inspired – they want to take away something from what the speaker said and use it to make a difference to their lives. A tall order for most of us mere mortals!

Nevertheless, there are techniques that tutors can teach to turn an average business presentation into a great one. Check out our recommendations and vocabulary set below.

How to structure an engaging presentation

There’s no magic formula for creating a great presentation, but you can find a lot of inspiration from TED Talks.

The average TED Talk takes months to prepare. They engage the audience because they a structured around three principles.

To dive deeper into this subject, check out this article How to Create Your TED Talk: An 8-Step Process.

Students can build upon these ideas to create attention-grabbing presentations in English.

What about question time?

Traditionally, speakers end a presentation by taking questions. However, nowadays it is recommended to answer a few questions as they arise during the presentation. This is because sometimes Q&As do not go well; questions are outside the scope of the presentation and the end of the speech can become dominated by someone other than the speaker.

For further reading, check out Different Ways to End a Presentation or Speech and Stop Ending Your Speeches With ‘Any Questions’ and End with this Instead.

The traditional way to start a presentation

Other ways to start a presentation

To share an anecdote – a short story about why the issue you’re going to speak about is important for you and the audience.

To share a quote – a thoughtful quote from a significant person related to the topic of the presentation.

As well as + noun

‘We tested the new antibiotic on chickens as well as sheep.’

And that’s not all – a big extra point.

‘The findings won him tenure at the university. And that’s not all; years later they won him the Nobel Prize.’

Not to mention – a big extra point.

‘Climate change is affecting the country, we’re having more extreme weather like heavy rains and gales – not to mention all the floods.’

However – formal way to say ‘but.’

‘We wanted to test the idea; however, we didn’t have the budget.’

Nevertheless – a synonym of ‘however’.

‘We don’t usually do this for clients, nevertheless, we will try.’

Although/ even though – expresses something that is the opposite of what you expect.

‘Although Albert Einstein was a genius, he spent the early part of his life as an administrator in a patient office.’

Even if + conditional – a contradiction in a hypothetical argument.

‘Even if we had the resources, we wouldn’t be able to complete the project on time.’

Despite + gerund – a contradiction.

‘Despite training for weeks, he wasn’t getting any fitter.’

Despite the fact + noun / another tense.

‘Despite the fact he studied, he didn’t pass the exam.’

So – general consequence of something happening.

‘The financial crisis affected the company badly, so we had to cut costs.’

So that – a person or organisation does something to cause an outcome.

‘We scaled back our activities so that we could focus on our core business.’

‘Our company did an IPO last year which means that we have more money to invest this year.’

‘The company’s public image was damaged due to the scandal.’

‘The company’s public image was damaged due to the fact there was a scandal.’

‘Since we don’t have much time, I’ll keep the presentation short.’

‘We’re moving offices next month; therefore, we’ll have to put this project on hold until next year.’

To give an example.

‘There are many difficult mountains to climb in Europe, for instance, Monte Bianco’

‘He has written articles about many industries in his career such as finance, IT, medicine and manufacturing.’

Whereas – a combination of ‘while’ and ‘in comparison.’

‘Our company has made investments over the last few years, whereas our competitors have focused on cost-cutting.’

‘Younger people are moving to cities. Conversely, older people prefer to live in the country.’

To be common-sense – to be what you expect or to be rational or reasonable.

To be counter-intuitive – to be the opposite of what you expect.

To go against the grain – to do something against the common way of thinking, living or working.

To be a trend-setter – to be the first person to do something which others follow.

To be human nature – to be the way people commonly behave.

To take some questions

‘OK, I’m ready for questions so fire away.’

Ways to end a presentation

In conclusion/ to conclude

In summary/ to summarise

To wrap up – when you want to end a presentation quickly.

‘OK, so to wrap up, the main points to take away are…’

‘The key takeaways of this talk is…’

To leave you with a thought…

‘Let me leave you with this thought….’

A call to action

‘So, this is my call to action: next time you answer a call…’

The rule of three

The rule of three is a powerful way to end a presentation. The speaker ends with three punchy words or phrases. For example:

‘So, to conclude this presentation about smart working; use communication tools effectively, collaborate more and judge performance on output not time spent online. Thanks, and have a great day.’

Famous examples of the rule of three:

Have a student who’s nervous about the presentation? Quell their anxiety with this short TED talk about how to create an engaging presentation.