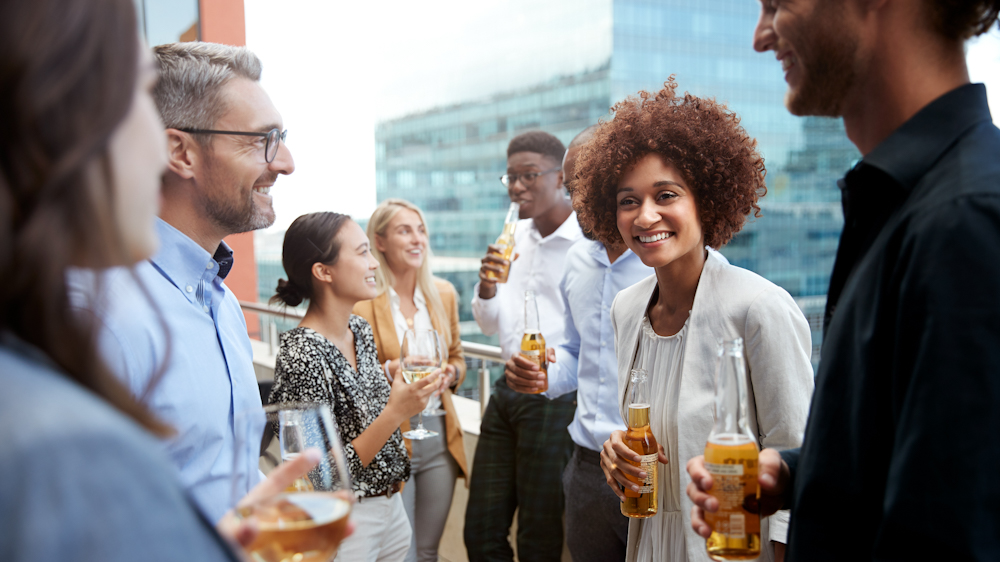 A common worry among business students is that, though they can speak about their work-life very well, they are completely out-of-their-depth when using English in social situations.

Socialising is a large part of doing business and so, to help your students feel more like themselves in social situations, we have compiled a list of phrases to tell stories, share a joke, as well as describe amusing situations and people.

Practice the target language by asking your student to give you example sentences, recount stories and perhaps even tell you a joke or two.

To break the ice – to form new relationships in a social situation.

Small talk – conversational chatting about nothing in particular.

‘What do you do to break the ice at parties?’ ‘Well small talk about the weather usually works for me.’

When you haven’t seen someone in a while

For/in ages – for a long time

To cost an arm and a leg – to be very expensive.

‘A pint of beer in central London costs an arm and a leg.’

To go crazy, mad, nuts – to ‘become’ temporarily crazy for something.

To ring a bell – to say that something sounds familiar.

‘No, I have never met Steve Norris, but his name rings a bell.’

To be on the ball – to be ready to take action.

‘Getting Adele concert tickets is a nightmare. You have to be really on the ball because they sell out within hours.’

To be a craze – to be the latest fashionable thing.

‘There was a craze for Pokémon cards among kids in the early 2000s.’

To hit the nail on the head – to be exactly right about something.

‘You’ve hit the nail on the head exactly. People don’t own cars anymore in cities because there is no parking.’

Out of the blue – suddenly.

‘And then out of the blue, I got offered a job in Portugal!’

To be a long story – the story is too long and don’t want to talk about it.

‘What happened to you this morning and why are you soaking wet?’ ‘It’s a long story.’

To cut a long story short – in summary.

‘To cut a long story short, I got a parking ticket.’

To end up + gerund/noun– the unexpected ending to a story.

‘We wanted to see a film but the cinema was closed and so we ended up going to the pub.’

To turn out + infinitive – the twist in your story.

‘She thought he was a great guy, but he turned out to be a criminal.’

‘We had a good laugh last night at the football match.’

To jump for joy – when you have received good news.

‘She got her exam results and jumped for joy.’

‘I had an awful day last Friday.’

To be fed up/ to be sick and tired of something – your negative feelings about something.

‘I am sick and tired of this task. When will it end?’

To be a nightmare – to have a terrible time.

‘Our car broke down in the middle of the night on top of a mountain. It was a nightmare.’

To be rubbish – your opinion on something.

‘The party was rubbish.’

To be a hassle – to be very inconvenient.

‘I had to take the hire car back to the depo this morning. It was such a hassle.’

To go down well/badly – something has been received well or badly.

‘My boss did his speech and it went down very well with the shareholders. Mine, however, went down badly.’

To be a pain in the neck – to describe a task which is very annoying.

‘We spent two hours sorting out a problem with our internet connection. What a pain in the neck!’

To be a chatterbox – someone who likes talking.

To be a good laugh – someone who is fun to be with.

To be a party animal – someone who loves to party.

To have your feet on the ground – to be realistic.

To have your head in the clouds – to be a dreamer.

Ask your student to tell you about a day, situation or holiday that either went really well or really badly.

Talking about luck and probability

Break a leg! – in the mouth of the wolf!

‘I have a big presentation tonight, I’m a bit nervous.’ ‘You’ll be fine. Break a leg.’

Fingers crossed – when you try to influence chance by crossing your fingers.

‘We got to the airport late but the plane was delayed. What a stroke of luck!’

Touch wood – when you try to ‘make’ something true by touching something for luck.

To dream on – keep dreaming because it won’t happen.

‘Perhaps one day I’ll win the lottery.’ ‘Dream on!’

No chance – no possibility

‘There’s no chance that we’ll finish the project tonight.’

A spell (or ‘run’) of good or bad luck – to pass through a lucky or unlucky time.

‘I’m having a spell of good luck at the moment. I found a new house and I got promoted within two months.’

When pigs fly/ when hell freezes over – there is no possibility that something will happen.

‘Maybe one day the Green Party will win the election.’ ‘Hmm, when pigs fly!’

Get your student to tell you about a time when they had an incredible stroke of luck.

Are they superstitious? What do they do to influence luck?

To have a good sense of humour – to find jokes funny.

To laugh at someone/to make fun of someone – negative (they are the object of the joke).

‘They made fun of the way he dressed.’

To be kidding/ to pull someone’s leg – to joke with someone.

‘Why did the skeleton not go to the party?’ Because he had no body to go with.’

To joke around – to pass the time with friends having a laugh.

‘My son was joking around with his friends and didn’t get any studying done.’

The punchline – the final line of the joke when you hope your audience will laugh.

‘If you’re going to tell a long joke in a speech, it better have a good punchline!’

When you don’t want to joke

To be not in the mood

‘Don’t be silly. I am not in the mood for jokes today.’

Ask your student to research two or three jokes for homework and get them to tell them to you next lesson.

Ask your student to invent two puns for next class. Here is some inspiration.